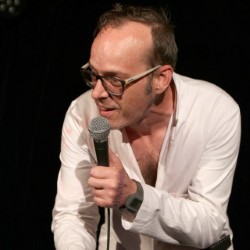 It must be an amazing place the imagination of Seymour Mace.
Year after year this unique performer delivers an outstanding hour of mayhem, peppered with mirth, audience involvement, wacky, yet amazing ideas that are outrageously entertaining and, as always, the extravaganza has the audience in stitches. I am pleased to say this year’s version is up with the very best.
It is almost impossible to cover all the bits and characters he delivers up for our delectation from the strong start with the Witch from the Future who tells of the audiences’ deaths, his joke generator, Mr Tuesday, the ventriloquist’s dummy, lip-syncing to Radio 4, a ‘Battle-rap Machine’… the list goes on and on.
For what could seem to be an unconnected series of different bits, the show flows relentlessly and meticulously put together by a comedy craftsman, be it his homemade props, his cartoon drawings on flipcharts even the costumes he creates are well thought out.
And then there are the laughs! Howls of appreciation are common place throughout the hour. I was actually a little concerned for the health of one woman sitting near me thinking she was going to do herself a mischief, or at least need to change her underwear she was laughing so much.
This is a show that should not be missed.
*****
Reviewed by Geoff
Stand 3
13.30 to 14.30
Until 26th (not13th)