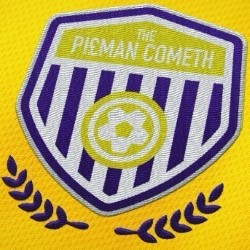 Dunwearie FC is on the brink of extinction. In fact all of Scottish Football is in a state of torment, with leagues sponsored by pawnbrokers and executives more interested in rock n roll – what is to be done? Alan Ledger, an insolvency practitioner, has the unenviable task of creating a rescue plan for Dunwearie. With all parties in a state of flux, there is one thing they can all agree on, Dunwearie’s Pies are the best in the game and they must stay.
If you are at all interested in Scottish Football, this play will ring many bells with you. The Radio Fitba interjections are particularly enjoyable, with constant forecasts of doom from the ever-gloomy James Hackwell. Ross Allan as Alan Ledger anchors the play as he deals with the various personas played by Calum Cuthbertson and Julie Coombe. All actors play their parts well and Julie Coombe’s standout performance as Jim Glum the manager was hilarious
The play itself didn’t quite hit the mark. There weren’t enough jokes and, despite the actors giving their all, there were quite often long spells with no laughter at all. Given the richness of the source material and the quality of the performances, this was slightly disappointing. Nevertheless there were a couple of fantastic jokes and football fans will find much to enjoy here.
Reviewed by Rona
Gilded Balloon Rose Theatre
2.30pm
Until 26th August