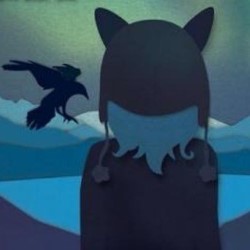 This wonderful piece of children’s theatre tells the story of Greta and her mission to rescue her brother Kay from the Snow Queen. There are just three actors in this production, and they are all equally brilliant, whether they are playing Kay, Greta, a talking crow, a travelling salesman, an old lady or narrating.

The script is just wonderful, magical enough to capture the imagination of children, but also very funny in parts, keeping adults engaged too. Special mention should be given to the actor who voices the talking crow, who was just brilliant. The crow puppet used was amazing to look at, and the crow itself delivered the best lines in the show.

My six year old enthralled throughout this show and has been talking about it since. She particularly liked the old lady character, and of course, the crow.

The Fringe guide says this show is suitable for children aged 3-9, but I would suggest kids aged 5-10. I think the lack of audience participation and the wordiness of the script would make it difficult for very young children. As a piece of children’s theatre though, this play is wonderful and a must see.