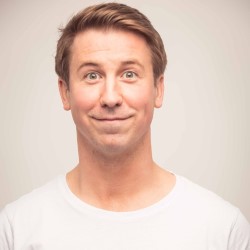 Carl Hutchinson is a comic who should have a higher profile than he already has in the comedy world because he can always be relied upon to deliver and deliver he does with his 2019 showcase of his talents.
I saw the early version of this hour a while ago prior to his tour and it was excellent. Yet if anything it is now even better as it is tighter, even funnier than before and of course still has the cheeky smiling Geordie lad delivering the gems of his stories and gags. And he has a few slides along the way as well.
Although he is at the world’s largest arts festival Carl does his show, then home to Netflix and gets house drunk he quips, blaming his drinking gene on his parents. This leads into material on drunken calls to long lost mates, a stag party, he doesn’t know where, his new house, DIY, a novel way of getting round his bathroom needs, at the airport Carl is not a nice person he claims and leads into anecdote or two to illustrate his claim.
Hutchinson can work an audience too. He seems genuinely interested in the stuff he gleaned from forays there, even if occasionally puzzled with a certain whisky liqueur.
Carl Hutchinson is the complete package. He is defiantly a big name in waiting. Grab a ticket while you can.
*****
Reviewed by Geoff
Stand One
18.40 to 19.40
Until 25th