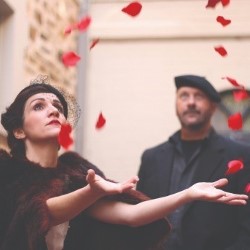 Michaela is obsessed by Piaf. She is not only similar in looks and height (at 4 foot 11) but she immerses herself  in this story of the “little sparrow” (as Piaf was fondly known). You would not believe that Michaela was Australian as her french is absolutely perfect.

Thanks to Michaela’s  amazing performance and research, we learn a lot about Piaf’s resilience and ambition throughout her short lived life. Given the era that Piaf grew up in, you come away from the show with enormous respect for this rebellious artist (who was quite the Madonna of her day!).

She was a passionate woman who had many lovers. This passion was very much part of who Piaf was and what made her music so special. Michaela delivers this perfectly as she accentuates every lyric and note as she sings her iconic songs..

Michaela built great rapport with the audience throughout this performance. It was a pity that the theatre was only half full the day I was there. I’m guessing Piaf is only appealing to a certain generation (at least that’s what it appeared the day I went to see the show). However, I believe Michaela and Greg have taken up this challenge with their contemporary musical arrangements. The acoustic version of La Vie En Rose was brilliant. Hopefully, as word gets out about how good their performance is, it will be selling out by the end of the Fringe.