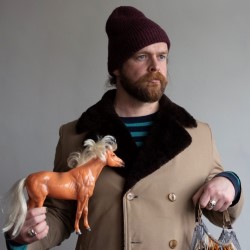 In the midst of this show with a manifesto, Paul Currie declares that religion is just a thing humanity invented because we’re scared of death. The validity of which can be debated elsewhere, but religion did/does fulfil a human need, and the gap it leaves is perhaps one this show (inadvertently) goes some way to fill. The show is a glorious, beautiful, joyful melange of ridiculousness and silly which literally exhorts people to reach out and hold hands with a stranger. There’s call and response with the audience, singing, and small bits which might be analogous with sermons. Mr Currie definitely has a strong band of adherents who seemed to make up large portion of the audience and helped us newbies to feel comfortable and join in.

Then there’s Mr Currie himself, an excitable person who wants to show you this thing which has positively delighted him, and which he wants to delight you with too. He’s entirely at ease on stage, and utterly in command of everything that’s going on, and this means that, although it might look a bit like anarchy, it feels like a safe and convivial audience to be in. There was quite a bit of – respectful and never mean – audience participation, though no one seemed very upset to be chosen.

If this is a new religion (/cult, you know the Fringe loves a one of those!), it’s a benign and uplifting one. Do what Paul says: create shit, smile at people, and be part of something. Mr Currie’s guiding mantra might be ‘because it’s funny’, and that’s definitely a good enough reason to see this show – it very much is.