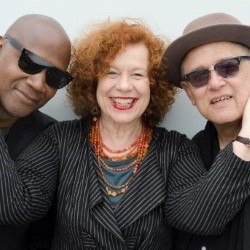 Sarah Jane Morris and Tony Remy provide a fitting homage to the late great John Martyn through their own interpretation of his music. They are joined on stage by Tim Cansfield their long term collaborator on acoustic guitar.

Sarah is famously known for her deep jazzy R&B vocals from when she performed with the band The Communards. She has a successful singing career that encompasses jazz, soul, classical and world music.

John had a baritone voice as does Sarah so she perfectly puts this to good use in this heartfelt tribute to him.

She’s been a fan since the age of 14 when she first saw John perform on the Old Grey Whistle test. Therefore the show is very much driven from a fan’s point of view about John’s music and its impact. There are interviews included in the programme from friends, musicians and family who provide their anecdotes of what made John special to them.

In keeping with the mellow fusion of jazz, folk and soul Sarah delivers an outstanding vocal to the backing guitar music from Tony and Remy. There is an emotional performance of Solid Air, a song John wrote for his friend Nick who suffered from depression and mental health issues.

The John Martyn fans in the audience were not disappointed by this fresh and invigorating re-interpretation of John’s music.  She had everyone joining in with I Don’t Wanna Know, which John wrote with his ex wife Beverley Kutner.

There was a standing ovation at the end of the performance. It was particularly interesting to hear a group of women who were talking to Sarah after the show about going to see John at the Glasgow Pavillion. Definitely a show for the John Martyn fans and those, like me, who were newly introduced to his music.