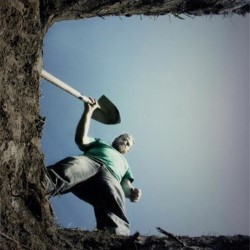 With a champagne combination of the writing of Owen O’Neill and the direction of Guy Masterson, Shaving the Dead already looked incredibly promising. If you add in the sublime casting of Simon Nehan as Eurig and Alan McKee as Connor, you are in for an hour of entertaining drama.
A play about undertaking may not be everyone’s idea of a fun topic, but the gallows humour and deadpan delivery of Welsh Eurig and Northern Irish Connor had the audience in stitches. Sitting either side of a coffin, Connor mourns the state of his marriage, his unhappy relationship with his recently departed mother and his hatred of his job. Eurig, on the other hand, mourns his relationship with his father, his lack of a love life and the lack of a suitable alternative to humbugs! All the while they are waiting for someone to pick up the coffin they are guarding and their suspicions of foul play mount as the time passes on. Then temptation gets the better of them….
This is laugh out loud drama at its very best. Simon Nehan and Alan McKee are fantastic in their roles – I have no idea how they keep a straight face every day. The dialogue is so sharp, and the Northern Irish and Welsh accents add a perfectly nuanced dourness to the proceedings. The well-deserved applause rang out at the end of the play – and will do so for the rest of the fringe.
Reviewed by Rona
Assembly George Sq
12.30pm
Until 25th August