Adrian Poynton – The New Rock ‘N’ Roll
Adrian Poynton has lived his life for ‘The Rock n Roll’ moments, some of which he will tell you about in his show. He mentions things that rock stars and film stars then proceeds to tell us about his equivalent offerings not quite the same star quality.  Adrian keeps telling us during the show that he’s a bit rubbish now if I’m not mistaken we are told that if we repeat something often enough we’ll believe it in the end. If that’s fact by the end of August will he have started believing he Is Rubbish. Cause I beg to differ.  Although not totally side splittingly hilarious he is funny, he also made me feel a little less rubbish for the rest of the day. His anecdotes are amusing and he spends the time trying to persuade us that we are all at times a bit rubbish and that with comedy being the new ‘Rock ‘N’ Roll"  he Rocks. He goes over the fact that his brain tends to work several seconds after his mouth, know the problem! This gets him into all sorts of trouble. This can happen to me and did after the gig. On the way out of the show we are given badges my mouth said "but it’s green!" or words to that effect, henceforth to be known as an Adrian Poynton moment. *** 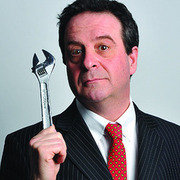