Tom Binns Does Ivan Brackenbury and Others – 4**** - One4Review 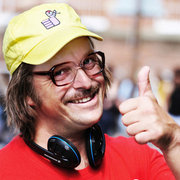 The “Pay What You Want On Exit” or book for £5 model of fringe ticketing means this show has two queues, one looking more tense than the other. Thankfully, most of both get in, and the room fills with a wide age range, clearly including fans from past shows snapping up the bargain.

Tom Binns has been playing Ivan Brackenbury for a number of years, so it’s strange to see him perform as himself, yet refreshing somehow, to see the former TV warm-up man in action. There are brief forays into a new character, but this one felt vague and ill-formed, so far. Still, the title character was always going to be the biggest draw for comedy fans, and Ivan Brackenbury didn’t disappoint.

Ivan’s stock in trade is hospital radio at its cringe-inducing worst, from celeb endorsements to poor sponsorships choices, but the cheeky pairings of ailments and utterly inappropriate tunes always brings with it plenty of laughs.

A good solid show, that may not set the world alight, but if it did, would do so to the tune of Prodigy’s Firestarter.

Martin Mor: How Do You Like Your Blue Eyed Boy Now Mr Death 4 Stars ****