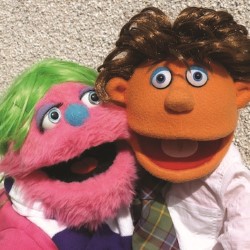 Like many, I know the full show quite well but had never seen the School Edition of Avenue Q before. How would a show work which is famed for being crude and adult, especially as that is where a lot of the humour is?

Actually, very well! Most of the show is still there, the biggest change being the song about the internet – this sanitised version works just as well as the ‘proper’ one… except you’re sitting there wishing they were doing the proper one! If you don’t know it though, then you won’t be disappointed as it still works well and still manages to explain why Trekkie has a fortune.

In the main this was a very good production with a functioning if necessarily basic set. The weakest point was the acting with lots of ‘arm gesturing’ and shuffling going on. There were a couple of weaker singers in the cast (who were stronger in other areas) but generally the sound balance was good (great to see the cast being miced in this venue).

The live band up in the lighting gantry were excellent, good playing with good speeds and the direction had some nice ideas, e.g. the porpoises. Well worth seeing.