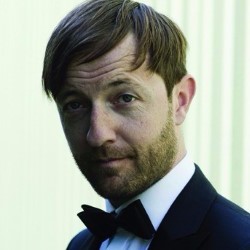 It wouldn’t be August without the annual pilgrimage to see Andrew Maxwell and I am not alone in this thought as even though this was the opening night and a wet one to boot, the huge George Square theatre was almost entirely full of his fans.
Although only arriving minutes before the gig due to traffic issues and apologising in advance for what might happen he was as always a consummate professional and it have been impossible to tell if he hadn’t referenced it.
Maxwell has the charm, charisma and eloquent style that does not require any histrionics on his part. He either sits on his stool or meanders about the stage yet all the time expounding his thoughts on what has been happening over the last year. And boy has he got plenty of material to work with.
Of course he had to expound on Brexit, the General election, the atrocities in London and just a little on Trump but a whole load was of family issues, the house move, the new arrival, his teenage son and religion, all subjects that gave his keen observational and comedic skills able scope to entertain.
Maxwell was the king of comedy on C4 a few years ago. It is great to see his crown has not tarnished with age.
****
Reviewed by Geoff
George Square Theatre
21.00 to 22.00
Until 27th (not 14th)