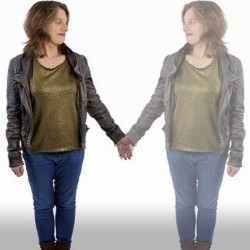 Compere, or possibly therapist, Rosie Wilby is a genial host who has made a whole show out of her recent break-up (Rosie Wilby: The Conscious Uncoupling, 18:30 at the same venue), and found in doing so that many, many other comedians had their own break up stories that they seemed desperate to share – and being comedians, not only share, but milk for every laugh possible.

Today’s guests were Brennan Reece, Rachel Creeger, Marcus Ryan, and Sooz Kempner. Although the theme is intended as people being dumped, Reece started with a tale of ‘dumping’ a stalker who thought they were an item, and who got quite scary. He then followed that with the love of his young life dumping him by text.

Creeger tells how, as a young Jewish girl, she ended up dating a Rabbi’s son, who was ready for marriage at 18, while she decidedly wasn’t. It all came to a head at a Kibbutz in Israel, but he continued to pester her for years.

In this very city, Ryan was offered no strings sex from a very persistent, determined fan, who wouldn’t take no for an answer. A short while later, he had a gig at the Glasgow sister comedy club to said fan’s original visit, where the staff pretended she’d been in contact to try again that very weekend (yes, we are looking at you The Stand!)

Kempner’s worst dumping was a guy who joined the Navy as a way of leaving her. Now that’s commitment to it being over.

As I read down that list, it doesn’t sound anything like the fun it was. These are, indeed, sad stories, but the way they’re told, with plenty of self-deprecating humour, and quick wit from the performers / therapy patients, this was an emotional, but very funny show.