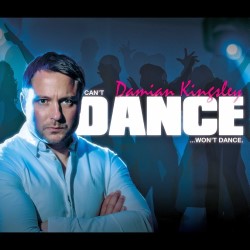 Sometimes an audience can make or break a show, and sometimes it’s all on the performer. The show was full, but the audience was a strange one; Mr Kingsley dealt with the unruly as if he were a teacher at one point (and lost the audience a bit), and then got us all on side again ten minutes later. An odd show, for the wrong reasons.

Damian has a phobia of dancing, and the show is about the impact of that phobia on his life, and his attempts to conquer it. The show is interesting, bringing in some really well-executed novel elements – like the argument between Damian and his video-projected girlfriend, extracts from emails, and the dance training.

The dialogue and the writing is pithy and realistic – I felt like I was listening to arguments I have actually had – and when he gets going, Mr Kingsley can be verbose and eloquent and deliver intelligent punchlines. At other times, it felt like he hadn’t completed the ‘dealing with a living audience’ part of comedy school and was on the verge of losing control of the class.

An ambivalent viewing of a show which is probably very good when it has a compliant audience.

Sarah Bennetto: All My Life’s Mistakes, Catalogued (Volume One) 4****