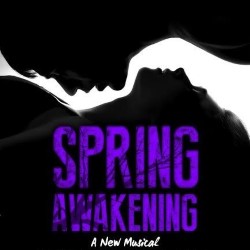 Spring Awakening, love it or hate it, is always popular at the Fringe and this production was no exception.

Staging was good, using this small venue to its best advantage with the cast always staying on stage and becoming a Greek chorus, if you like. Ensemble singing was excellent and powerful with the complicated harmonies of the Song of Purple Summer especially coming over nicely. However some of the solo singing was surprisingly weak and often very nasal, strange given all the musical theatre training mentioned in the programme.

A couple of other issues, there were some timing problems with the cast rushing at stronger points and the accents drifted between American and RP, often within sentences. This was particularly noticable in the songs where they were singing in RP but using American vowels. Quite strange. Also, some of the choreography seemed disjointed, at some points they would go for the big angsty moves which are common in the show and then just stop. Then start and stop again. I didn’t know if it was trying to be clever or simplified or what.

There also wasn’t enough definition between the various different adult characters (costume changes would have been nice) and someone beside me hadn’t realised they were meant to be different people and was greatly confused.

On the plus side, the three-piece band worked surprisingly well (given what was quite a reduction in instrumentation) and there were some nice directorial touches.