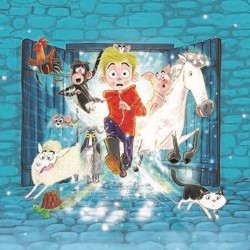 Story Pocket Theatre have brought their version of David Baddiell’s AniMalcolm to the Edinburgh Fringe. This production is an enjoyable adaptation of the book in which Malcolm learns the importance of not judging based on appearance.
Malcolm is a boy who, since the unfortunate ‘monkey moment’, hates animals but unluckily for Malcom his family love them. As part of his birthday present not only did he receive the unwelcome gift of his own pet chinchilla he also recived the gift of a school trip which sadly for him was to a farm. This is where the Malcolm meets K-Pax, the mystical goat, and is taken on a magical journey of enlightenment which helps him understand animals better.
The actors provide good solid performances in bringing the animals to life by adopting their distinctive traits and mannerisms. My particular favourites were the tortoises, Bjornita (Shanon Rewcroft) and Benny (Owen Jenkins) who brought the comedy and Zsa Zsa the Cat (Lucy Edge).
The costume changes are slickly executed as Malcolm (Matthew Hamper) transforms from one animal in to another and the simple but versatile set, appropriately designed from cages, provides the perfect backdrop to this production.
The polished performances and beautifully written story carry this production however I felt it could have been more fun for children. It would benefit from a few more upbeat songs to bring some energy to the show and a lot more humour.
***
Reviewed by Lynne
Gilded Balloon Teviot – Debating Hall
11:30
Until 19th