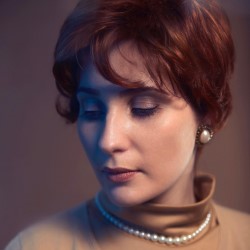 Eliza Jackson tells the story of Marni Dixon who was the ghost singer behind the voices of some of the most famous Hollywood stars such as Audrey Hepburn, Deborah Kerr, Natalie Wood and Marilyn Monroe.

Due to her contract, very few people knew that Marni Dixon dubbed the songs that these famous actresses sang in musicals such as My Fair Lady, The King and I, West Side Story and Gentlemen Prefer Blondes. It wasn’t until Deborah Kerr let the cat out the bag at the premier of the King and I that it became public. Because of her incredible dubbing work Times magazine called her “The Ghostess with the Mostess”.

Through dialogue and song, Eliza Jackson delivers a fascinating insight into Marni’s life and career. On one side of the stage there is a microphone, headphones and a music stand, which depicts the recording studio where Marni performs the songs. On the other side there is an armchair where she sits and gossips about her life and the actresses she has worked with. Eliza perfectly captures Marni’s Californian accent as she smoothly switches from talking to singing. Her voice is pitch perfect throughout each rendition of the songs.

I was absolutely engrossed in this story, which was all down to Eliza’s fabulous performance and excellent production of this show. Fans of musicals and those who love autobiographical stories will love this.
*****
Reviewed by Lynn
Assembly Rooms – Drawing Room
14:00
Until 26th