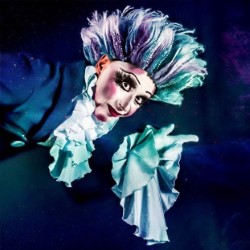 Martin Kemp will have you mesmerised as he speedily transforms from one character to another throughout his amazing mime performance.

The show starts with him standing in front of an imaginary mirror applying his clown style make up – never mind the speed at which this is done but the accuracy without taking his eye out is pretty impressive (I could do with some tips!).

My first reaction when he danced around the stage as half man/half women that this is going to be a predicable performance, given how many times I have seen this routine before. However, I could not have been more wrong as it becomes more hilarious, outrageous and surreal as the night progresses. His comic timing and facial expressions are absolutely brilliant. It is no surprise to hear he is one of the best mime and impersonators in Europe. The routine with Vitameat a Vegamin – spoon your way to health was brilliant. He provides a hilarious rendition from films such as the Wizard of Oz, Pirates of the Caribbean, Titanic and the Sound of Music.

By the end of the show I was absolutely stunned by what I had just witnessed. A brilliantly entertaining hour but don’t take the kids!