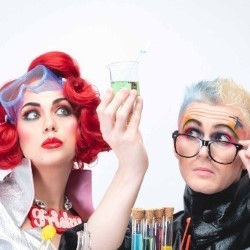 Frisky & Mannish have set up their Pop Lab in the Palais Du Variete for you to witness their hilarious scientific analysis of the molecular intersections between every pop song ever.
With audience participation from the start this is a lively show.
They are conducting a research project where they are looking to find an effective vaccine for the contagious Tropical House virus sweeping through the pop world. As Frisky’s amazing voice sings songs from artists such as Kylie, Cliff Richard and even the full production of Les Miserables, she is still not able to make these songs sound uncool to the music of Ed Sheeran’s Shape of you. Who would have thought that yodelling a Fleetwood Mac song would even sound good. I loved their rendition of Rick Astley (or as they like to call him Rick-Rolling) Never going to Give You up as they asked the audience to provide a musical genre for them to sing this song. Frisky’s performance of the Jazz style was absolutely hilarious. They also provide a very good examination of Love Songs where Frisky serenades to one member of the audience. I am pleased to tell you that they did eventually manage to find one artist who was immune to this experiment where their songs were extremely uncool, but you’ll need to see the show to find out who that was.
This was a very entertaining performance from two very talented comedy/musicians. I would recommend you go and see this PopLab experiment for yourself.
****
Reviewed by Lynn
Assembly, George Square Gardens, Palais Du Variete
19:00 (1 hour)
3rd – 25th August (except 12th & 19th)