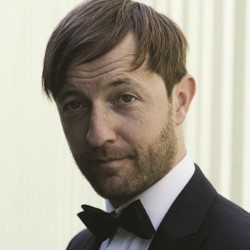 As certainly as the awful Edinburgh weather will be bad at Fringe time, Andrew Maxwell is even more reliable at delivering his achingly funny Fringe show to total capacity audiences. Once again these two unrelated facts have come to being the only difference is Maxwell isn’t doing the whole run.
The utterly relaxed Irishman perched on his stool, smile permanently on his face, has the vast auditorium unanimously with him as he ranges through the repertoire of the hour. His crowd work is hilarious, he has anecdotes aplenty to expound on for even obscure places and the delightfully written material is as always a mixture of deep thinking juxtaposed with his often irreverent, amazingly funny take on things.
As well as travels, he talks widely about politics, Brexit obviously, Australian PMs, the rise of the Scottish Tories, Trump of course together with gorillas, zoos, swimming and his family forming a major part of the all to short hour.
Nobody wanted the gig to end, I suspect him least of all. He makes the audience feel special, almost as a small group he was chatting to in the pub. Quite an achievement, but something he manages each and every year.
Tickets are sure to be difficult to get but do try. You will not regret it.
*****
Reviewed by Geoff
Assembly George Square Theatre
20.30 to 21.30
Until 28th