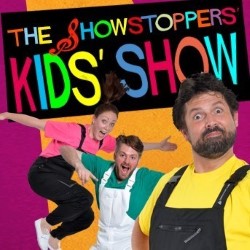 What a terrific addition to the Fringe program! This is a 100% interactive show for all the family It is fully improvised and everyone gets a chance to be part of the show. on the back of this each show is guaranteed to be different from the previous performance, ours for example featured Twilight the unicorn princess who lived in a giant coke bottle going on a very jolly jaunt along with Mickey Mouse to Disneyland on a giant cloud!
The improvisation was seamless and thoroughly entertaining and my daughter came away asking to go back again and there were other children asking the same thing of their parents as we left. The songs and music were funny and there was some excellent use of some simple props. The cast were there welcoming us upon arrival already in character and the whole show was a pleasure to be a part of from start to finish.
If you have a family and are looking to partake in some of the children’s entertainment then this show should be on everyone’s must visit list, on the way out we were advised that there is also an adults/family version of this show and if the children’s version is anything to go by, then that is most probably worth a visit also.
All in all, this was an absolute delight and we may visit again.
Pleasance Above.
Pleasance Courtyard.
3rd – 21st August.
£8.50/£7.00
Reviewed by Kath.