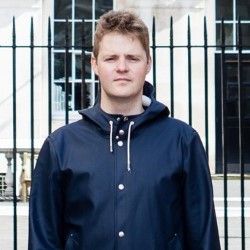 Tom Ballard returns to the Fringe after his best newcomer shortlisted show from last year. He plays the same room and same time as before but don’t think this means he’s going nowhere.
In this year’s offering Tom mainly discusses current affairs whilst having a fair bit of chat with the audience. He tells us that he was recently asked to host Q & A back home in Australia, he’s not sure why as by his own admission he’s no David Dimbleby and his first gaffe on the show proved that.
Tom is obviously very politically and socially aware, caring about the world around him. He talks about immigration, the American presidential election and the dilemma that brings, Australian and UK politics, including Brexit with a very novel idea on making election day that bit more interesting.
He explains why everyone should be a feminist, discusses the sexuality of terrorists and shares a few anecdotes on the evils of alcohol and drugs.
He has good rapport with the audience from the start although possibly has slightly more input from them than is necessary asking their opinion on a number of topics.
This is a really enjoyable, funny, show with a lot of well researched material and Tom Ballard I am sure has a very bright future ahead of him.