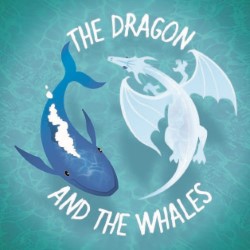 The concept of this show is a very sweet tale, of an exhausted dragon meeting some whales, and of a baby dragon who goes on to be brought up by the whales as their own. She then only fully becomes her true self after a lightning strike reveals her glowing heart.

Today’s show was described as a ‘relaxed performance’ and came with warnings of audience interaction, mild peril and a bubble gun.

The children seemed to enjoy the cast – introduced to us as Georgie and Harriet – coming into the audience to involve the younger members, and let them get a closer look at dragon puppets and the golden egg.

The story was told in a mix of storytelling, puppets moved by the cast, and shadow puppetry, with lots of musical pauses in the showing, which unfortunately slowed the pace considerably, and left the piece feeling dragged out to fill the timeslot.

Both the cast tried very hard to get energy into the room, but the tale is perhaps a little too sweet, the peril too mild, and overall, this just needed more excitement.