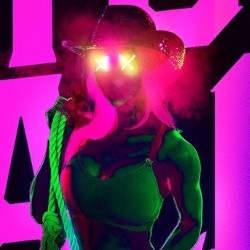 Madam Boozy Skunton is the host of this outrageous wild west circus extravaganza at The Atomic saloon.
There’s plenty of audience participation during the show so I should warn you, if you’re the slightest bit shy or easily offended, do not sit anywhere near the front.
Blue Jackson, appropriately named due to his bright blue cowboy attire, gets the evening started with his sing along version of a very non PC love song.
Madam Skunton has her work cut out keeping this troupe of entertainers under control. Even with the Reverend Peabody in attendance, who was there to cleanse your sole, this show could not have been anymore outrageous. Don’t be fooled by the innocent looking nun Sister Maria, she certainly has some special skills going on underneath that habit of hers.
Throughout the madness and mayhem there are some amazing circus performances. From mesmerising hula hooping, a jaw dropping trapeze act from an even more jaw dropping muscular trapeze artist and an incredible gymnastic performance from the handsome mayor.
At the end of the show there is a brilliantly choreographed saloon brawl. For any shy retired people, I should warn you that you will be in for a real eye full during this riotous punch up.
Madam Boozy Skunton is a brilliant host at this chaotic and hilarious hoedown. A great show to end your fringe day, particularly with a group of your friends.