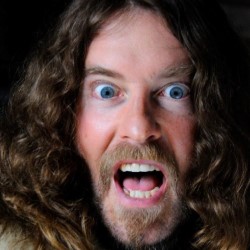 It has been a couple of years since the amiable Canadian comic Craig Campbell has performed at the Fringe but he is back in one of his favourite places doing what he loves comedy at the Fringe.

Campbell is a much travelled guy, his crowd work elicited a few visitors to these shores, yet he managed to draw anecdotes and stories personalising this, and probably every gig.

As a comic he has various road stories, distances between places, A9 average speed cameras, Scottish town planners, the Danish language, the Finn’s obsessive saunaing and occasional unusual additives to the coal are all sources of stories and laughs for this laid back performer.

Then there is also a segment about his recent fatherhood and having been present at the birth, hin having even more respect for women.

But he is Canadian and I suppose it is only natural that a number of his stories have a flavour of his homeland, whether it the legalisation of marijuana, the wild life, sea kayaking or the concern of drivers, even his ability to call birds on the prairies , oh and don’t forget camping and halibut too.

This is a nice laid back hour and there were laughs a plenty. Maybe it was the crowd, maybe the weather, but there was unfortunately a slight lacking of energy in proceedings unfortunately.