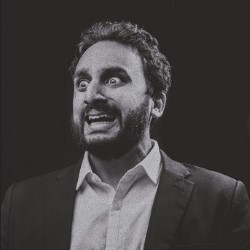 Nish starts his show by telling the audience a bit about himself, his Indian heritage and problems associated with it. He’s self-deprecating about his adolescent years and his unsuccessful attempts to be cool. He thought going to concerts on his own would be a good way to fit in but not knowing the correct etiquette let him down. He covers British history and the convenient re-writing of it. The EU referendum result and aftermath, plus the annoyance of it being so close to the Fringe when most comedians had their material already written.
He really dislikes privileged rich white males with their own set of rules. Nish cleverly covers a lot of politics in the show without being in your face. He is passionate but reasoned in his point of view, which he gets across with brilliant humour.
This is an excellent hour of comedy, the Cabaret Bar at the Pleasance was packed out the night I went to see Nish, so much so he actually had people standing behind him. The audience loved him as he kept them laughing throughout.