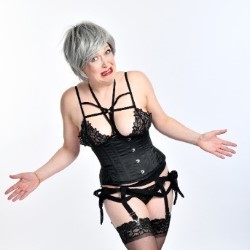 Lolly Jones has taken a very different slant o poking fun at politicians for her Fringe show this year using multi-media, lip syncing, and burlesque, yet not a spoken word from her during the entire performance.
What we get is vox pops of speeches or statements played while she is dressed, or sometimes somewhat undressed, portraying Theresa May, Maggie Thatcher, Angela Eagle, Arlene Forbes and Nicola Sturgeon using a variety of wigs, costumes and facial expressions to parody those she is depicting.
The necessary costume changes are covered by VT on screen of Liam Hourican playing a S&M loving Jacob Reece Mogg and even Gerry Adams, and the addition of two dancing guys in gold hot pants also added to the laughter.
As a satirical look at the way politics is played out this is certainly different. Whether it is objectifying the women, or just a bit of fun is unclear, but it will be difficult to watch Theresa May without thinking of her burlesquing her way through PM’s question time or Ms Sturgeon without thinking of her fan dancing complete with YES nipple pasties.
***
Reviewed by Geoff
Assembly Roxy Downstairs
20.50 to 21.50
Until 25th