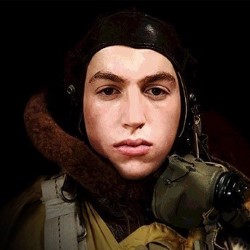 As we enter the venue, we are also boarding a Lancaster Bomber about to embark on a raid over Germany in 1944. The engines are already running, ready to take off, but our view is only of the internal wireless station. We hear the voices of the whole crew over the plane’s radio, but is it Thomas Dennis as John, the wireless operator, who takes centre stage in a terrifying hour-long journey. It is the crew’s 35th mission, and apparently their last, but it is fraught with problems – an early engine fire, a compass loss, constant attacks by fighter planes and flak all add to the danger. The noises of the gunfire, bomb blasts and of the plane itself are so loud that you really feel you are on the mission yourself, and is it truly frightening. No wonder the wireless operator thinks he is “dead already” – the average age of death for an airman was 23. The mental strain on the wireless operator is very evident from his nausea, nightmares and guilt about who and what he was bombing. The survivors of bombing missions suffered terribly from PTSD, but unlike other services, members of bomber command were never awarded any campaign medals – possibly because the Government was embarrassed by the 600,000 German civilians killed during bombing raids. This is a compelling hour of intense drama and I would highly recommend catching this show.